NanoVNA V2 (S-A-A-2) is a low cost 3GHz T/R vector network analyzer developed by HCXQS in collaboration with OwOComm. The V2 hardware is a new from-scratch design and is not based on the earliest V1 design from edy555. Compared to earlier NanoVNA versions, V2 does not use harmonics for measurements and achieves higher dynamic range.

This is the only official users group. Be careful and note the URL is NanoVNAV2.

Beware of cheap underperforming clones: as of July 2021 all non-Plus/Plus4 hardware on the market are clones (we have stopped producing V2.2 versions since October 2020), which use salvaged parts and perform badly, and users have reported software/firmware incompatibility. See official stores below and look for Plus/Plus4 versions only to ensure you get a supported version. See FAQ | How to avoid a bad clone.


The following stores are selling clones.

Because of disputes about anticompetitive behavior, the original developers officially do not allow Hugen/Zeenko to make and sell any of our designs. We have issued a public statement in October 2020: https://groups.io/g/nanovna-users/message/17875
The designs have been under a non-commercial license since 2021, so anything still being produced are illegal clones and will have no support. 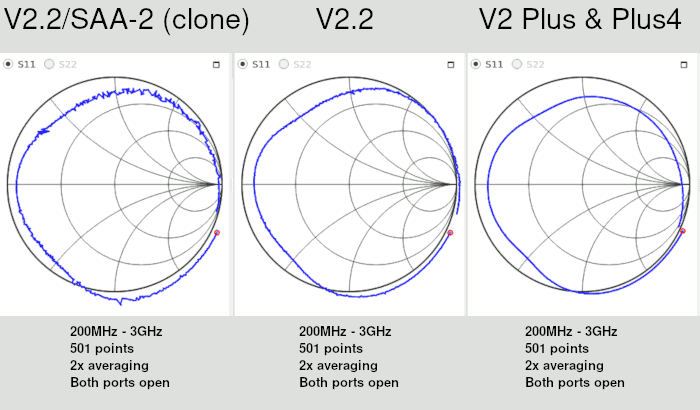 This is the only official users group. Be careful and note the URL is NanoVNAV2.

The specifications below apply only to devices manufactured by HCXQS or NanoRFE.
Beware of cheap clones that use salvaged or reject parts which do not meet specifications.

Note: All V2 versions switch on and off the test signal rapidly and can not measure crystals or be used as a signal generator. See FAQ. For measuring crystals we recommend using an original NanoVNA by edy555.

The NanoVNA V2 measures the following:

The following items that can be calculated from these can be displayed:

To use the NanoVNA V2 for one port measurements (e.g. antenna impedance), you will need the following:

The basic operation and menu structure of the NanoVNA V2 is very similar to the original NanoVNA.

User Manual for all V2 versions

V2 Plus4 User manual by NC4BR

Menu Map for all V2 versions

For firmware releases go to the Hardware versions page which lists the latest stable firmware builds for each hardware variant.

There are also experimental firmware releases at downloads.

Firmware sources are at https://github.com/nanovna-v2/NanoVNA-V2-firmware

There are two PC programs compatible with the S-A-A-2. NanoVNA-QT is the native V2 software and allows adjustable sweep points and firmware updating. NanoVNA-Saver was originally developed for the V1 NanoVNA but now also has support for V2.

The schematics and PCB layout files are available here:

The design is licensed under CC-BY-NC-SA. You need to obtain specific permission every 3 months to sell hardware using this design. It is in your interest and everyone's interest to abide by basic business ethics.